I hope many people find and watch this video on the dangers of constant mask weaing. Which OSHA well knows since they train the experts who train the people who have to make sure proper safety protocols are followed in work places. See the OSHA Director's college thesis on the subject at about minute 25.0, which he apparently disavows now since he told the former employee he flat didn't believe what she was saying.

Government trained OSHA mask experts Tammy Clark & Kristen Meghan join Del in-studio to break down vital info on masks, PPE, and their role in #Covid19 prevention. Every adult on this planet wearing a mask needs to hear this riveting discussion.

Mask police hippocrite or getting ready to blame masks for his lack of mental acuity? That would be rich. He took it off before entering a gym, left it off, then put it on improperly.

Couldn't resist a midweek post. With a couple of instances of how diligent these mask police people are to keep everyone safe. Uh huh, their guiding force must be a variation of the old elite mantra, 'Masks for thee, but not for me.'

Cases in point, Kaitlin Collins, the vocal proponent of that mantra at White House press briefings. She thought the cameras were off when the briefing ended and couldn't wait to snatch that mask off, smirking as she did it. She must really love (sarcasm) her fellow reporters OR know they're not in any danger because masks are useless. 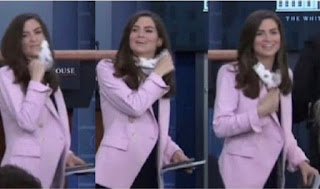 Another proponent of the mantra is California politician Maxine Waters, who Tucker Carlson spotlighted a day or so ago with a video from someone who caught Waters without her mask and confronted her. Back in July Waters, (D California) declared that Herman Caine didn't wear a mask at a Trump rally, contracted the virus and died, leaving the clear impression she thought he deserved to die because of his lack of a mask.

Evidently the two diligent 'maskers' find their masks too, too stifling, just like the rest of us.

Bury the Truth, They're Good at That

The article below is copied in its entirety from the Conservatuve News website, The Gateway Pundit. If you are not familiar with that website, check it out. There are a number of other good Conservative News sites as an alternative to mainstream media.

I always wondered about the reasons behind Dr. Fauci's determination to have this research funded by the U. S. by devious means after it was  deemed so dangerous by the CDC that it was halted in the U. S. After the research, was handed over to the Wuhan lab, he also handed out a millions dollar grant to that lab. Given the fact of his involvement in patenting vaccines and the money involved in same, it makes sense. Perhaps the lady research scientist in the project, who died thereafter, decided to try it on herself before it was distributed, to her sorrow. If this is what happened, I have to applaud her integrity.
Underlinings are mine, to highlight information I feel makes the article more 'user friendly.'

And, by the way, where have we heard of  an 'intranasal' vaccine? Oh, just in the last couple of years, that's been a preferred method of administering annual flu vaccine. Only this year I've noticed the ads push 'shots', as in the past. Paranoid? Possibly. But I think not.

Are the Global Scientific Elite Trying to Bury the Truth About the Origin of COVID-19?
By Joe Hoft
Published October 5, 2020 at 7:15am
Guest post by Col. Lawrence Sellin (Ret.)
There may be some culpability involved, but the huge resistance being mounted by the international scientific elite, the media and vested financial interests against conducting an objective analysis of the origin of the COVID-19 virus is primarily about money.
If it would be determined that the COVID-19 pandemic resulted from a laboratory leak of a genetically engineered virus, it would not only disrupt the flow of huge sums of research funding, but adversely affect the investments of those vehemently opposed to President Donald Trump's efforts to make the U.S. economy less dependent on China and, therefore, make the U.S. less vulnerable to Chinese geopolitical blackmail.
There is growing scientific evidence that the COVID-19 pandemic may have resulted from a vaccine development project gone wrong.
Live-attenuated vaccines are a type of vaccine used for smallpox and childhood diseases like measles, mumps, rubella and chickenpox, in which a weakened or "attenuated" form of the virus that causes the disease is manufactured.
Because such vaccines are so similar to the natural infection that they help prevent, they create a strong and long-lasting, even lifetime immune response.
Live-attenuated virus vaccines must possess certain characteristics to be safe and effective.
They must have lower virulence and replication capability than the natural pathogenic form of the virus, but be able to induce a pronounced immune response.
Of additional importance is that the live-attenuated virus vaccines should clear quickly from the body and not revert or mutate back to the natural pathogenic form.
To fulfill those characteristics, certain modifications providing protection strategies, or "circuit breakers," must be engineered into the viral genome, which are also potential markers of artificial manipulation.
An ad hoc group of scientific investigators known as DRASTIC have compiled a 36-point list to buttress their claim that the COVID-19 virus could have originated in a vaccine development program.
For example, a central mechanism for controlling immune responses is mediated by interferons. The COVID-19 virus seems to have some signatures in its genome which indicate interferon hypersensitivity compared to the coronavirus responsible for the 2002-2003 pandemic.
Another indication that the COVID-19 virus may have been the product of an attempt to produce a live-attenuated virus vaccine is the accumulation of "synonymous mutations" in the spike protein compared to RaTG13, which the global scientific elite claim is the nearest bat coronavirus relative.
The artificial accumulation of synonymous mutations has been described as one method of producing live-attenuated virus vaccines by "deoptimizing" the genetic code and inhibiting replication.
The most striking indication of genetic manipulation of the COVID-19 virus is the presence of the furin polybasic cleavage site, which does not exist in any closely-related bat coronavirus yet identified.
Given its role in the virus-cell or cell-cell membrane fusion process, the DRASTIC team suggests that the insertion of the furin polybasic cleavage site may have been related to a high-risk attempt to produce an intranasal "self-spreading" vaccine spray.
"Self-spreading vaccines are essentially genetically engineered viruses designed to move through populations in the same way as infectious diseases, but rather than causing disease, they confer protection."
Obviously, much could go wrong using such an approach.
To avoid the scientific equivalent of the Russia collusion hoax, the Trump Administration should not rely on the international scientific elite, the media and vested financial interests to shape the debate, but should appoint an independent and objective task force to determine the true origin of the COVID-19 virus.

Lawrence Sellin, Ph.D. is retired from an international career in business and medical research with 29 years of service in the US Army Reserve and a veteran of Afghanistan and Iraq. He is a member of the Citizens Commission on National Security. His email address is lawrence.sellin@gmail.com.